In the fickle and turbulent world of contemporary art, few trajectories have been as consistent and serene as Vladimir Cora’s. Born in Acaponeta, Nayarit, MX, 1951, Cora is a self-taught painter and sculptor who began painting with oils on canvas and then with acrylics and enamels. Later he began sculpting, starting with wood, then plaster and bronze. His bronze works show influence from Alberto Castro Leñero with whom Cora has worked.

Cora was named after Vladimir Lenin by his father, a saddle maker and avid follower of politics. He became known in the decade of the seventies, and now, more than 40 years later, he is still painting and creating with an accelerated interest in his works. His development as an artist has not experienced serious changes in direction or transition from one style to another. He has maintained a consistent identity, using rich colors in a minimalist style. His painting technique is not sophisticated or elegant but rather expressionist, coarse and spontaneous. His use of light and color shows influence from master painter Rufino Tamayo, whom he met in 1978 and remained his student from then until his mentor’s death in 1991. Since then, Cora has risen to the heights of his teacher.

Almost all of his art is done in series and based on a theme. Recurring themes in his work are the Twelve Apostles, flowers, fruit, birds and female nudes. His depictions of women are often related to the concepts of desire and devotion, frequently with the body partially hidden to give a sense of looking onto a private scene. When the woman is completely shown, she often assumes monumental proportions with a solid anatomy.

In December 2000, 500 of his paintings were among 1,800 works displayed permanently at the Los Angeles County Museum of Art as part of the Bernard and Edith Lewin Latin American Art Galleries collection. Cora’s paintings are in the company of fellow artists Rufino Tamayo, Jose Clemente Orozco, Diego Rivera, and David Alfaro Siqueiros. The permanent collection is the country’s largest 20th-century Mexican art exhibit and worth more than $25 million.

Cora spent part of the 80’s in Palm Springs where he met the Lewins through Tamayo. His works were exhibited at their gallery until the 90’s.  Now Cora returns to Palm Springs with his solo exhibition VUELTA PROHIBIDA at the Jorge Mendez Gallery. He considers this exhibition a homecoming and will celebrate the occasion with his most recent paintings and sculptures – rich both in color and culture, and certain to add to the storied progression of his work.

Vladimir Cora has had over 150 individual exhibitions in Mexico and internationally. He continues to paint and sculpt from his coastal hometown of Acaponeta in the Mexican state of Nayarit. 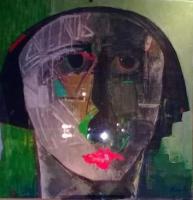 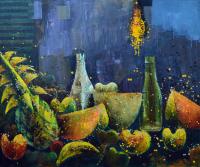 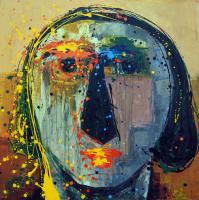